We’ve all heard of the Phantom, the expensive flagship drone of from DJI, but the Phantom also has a smaller, less expensive cousin!

The Spark offers all of the basic features you could want in a drone with a more affordable price tag. The DJI Spark’s main advantage over other drone models is its size. It is small enough to nearly fit in the palm of a person’s hand, giving it unrivaled portability. It is a great drone for those on a budget or beginners entering the world of aerial cinematography. The simple controls and easy use of the drone are a plus for those with less experience flying drones.

The drone offers great specs in a small package for an affordable price and it offers decent video footage (1080p) and smooth controls. The drone is designed similar to every other drone on the market (it is a quadrocopter) and can be controlled by smartphone. A controller can be bought with the more expensive DJI Spark package for more precise controls. We highly recommend this package because of the major advantages the dedicated controller has over just controlling the drone by smartphone.

For most drone operators, video footage and smooth aerial cinematography is the primary reason for owning a drone.

Drones offer a unique camera and video perspective making them great for photography and filming. The DJI Spark has a 12 MP camera for still photography and 1080p/30 fps video footage. These are fixed values and they cannot be altered to higher or lower resolutions.

Ok, so recording in 1080p today is not that impressive by any standard since many of today’s drones record in 4k, but, can you carry them drones in your pocket? Because with the DJI Spark, YOU CAN! 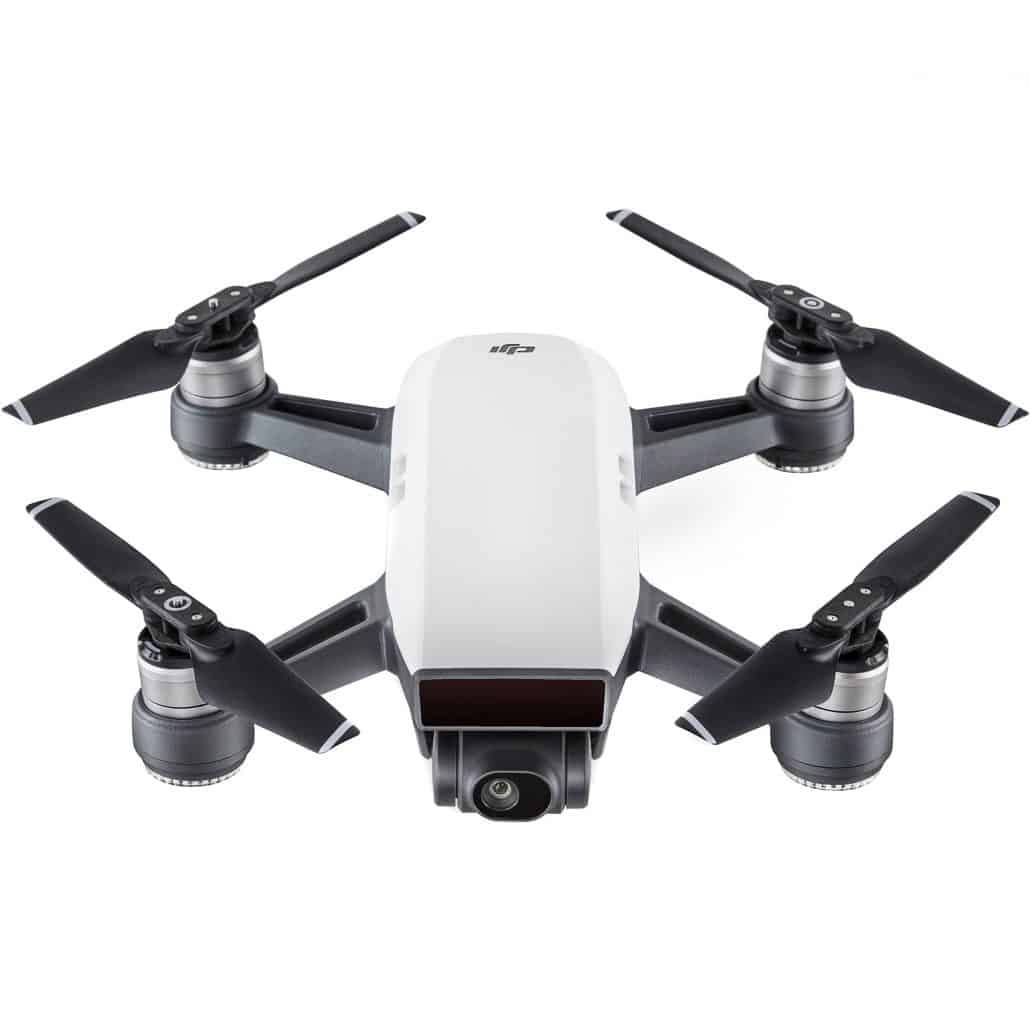 HONEST BUYING GUIDES
Trusted by thousands of readers, even featured in

To ensure smooth footage, the DJI Spark has a 2-axis stabilized gimbal camera.

The 2-axis stabilization is well suited to a small drone like the Spark because it extends the small drone’s battery life and does not over encumber it. The stabilization has proven to be able to withstand mild winds even though it is such a tiny drone. Its rotors are very powerful and keep it in the area very effectively. The built in stabilization should be enough to handle most flights, but more extreme winds and higher speeds may cause a noticeable shake in video footage. 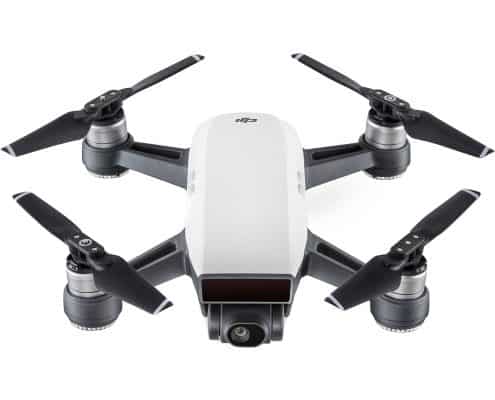 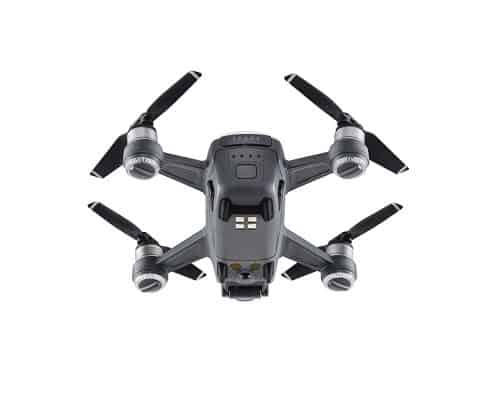 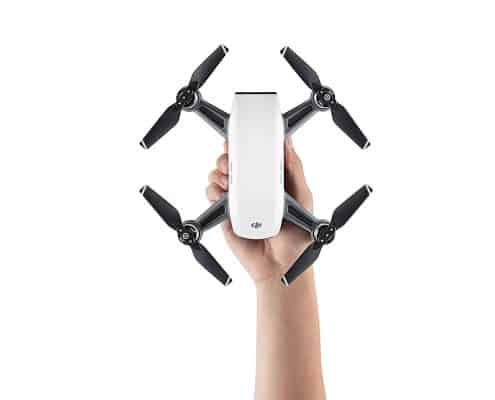 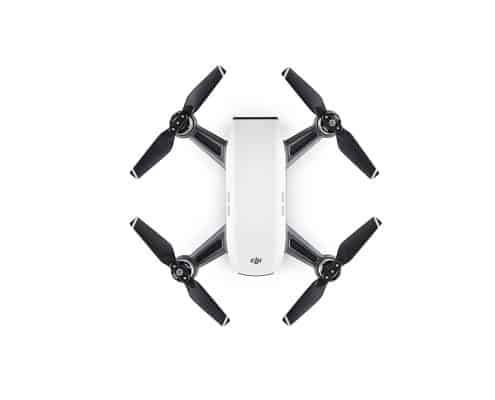 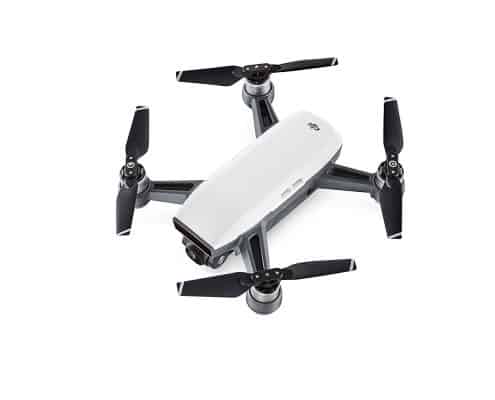 The drone’s camera is limited because it can only move to record what is ahead of it and what is below it whereas more expensive drones may also be able to move their cameras toward the side or the rear. However, the DJI Spark does feature subject tracking and GPS navigation. These features are a standard of the DJI drone line and allow for smoother footage when trying to get tracking shots.

The footage itself is not bad although it is slightly washed out in appearance. There is a noticeable difference between the 1080p footage from the Spark when you compare it to the 4k footage from the DJI Mavic, the second smallest drone in the DJI line up. The Spark footage is lacking in detail when compared to the 4k footage (as it should) and the darks are visibly more washed out. However, the 1080p footage still looks great and certainly does not look noticeably poor in quality unless compared to much higher resolutions (such as 4k).

Overall, the video quality is not bad for the price point and will not be noticeably poor unless you compare it side by side with higher quality footage from a more expensive drone. The drone’s built in stabilization does a great job in most situations and you should not have issues with shakiness unless you are flying in extreme weather. The memory should not be an issue as most bundles come with a 32 gb SD card and buying one should not be difficult or expensive if you get a cheaper bundle. This drone offers the most basic video features found in more professional drones and is a great introduction to drone features and controls.

Fear not, the Spark’s powerful rotors do a great job of keeping it stable in the air during windy days.

As we previously stated, the Spark footage is stabilized by a 2-axis gimbal. The gimbal performs well, especially in windy conditions. This is slightly surprising given that the drone itself is tiny and seems fragile enough to be killed by a friendly breeze.

The Spark is advertised as having a top speed of 31 mph, but it is not easy to reach this speed outside of a testing environment. If you have a smartphone controller your top speed will be limited to just 12 mph, and if you have a dedicated controller your speeds will be limited to around 25 mph. The low speed with a smartphone is unfortunate but not a big deal (and flying low speeds will also extend your battery life), but we would recommend buying the more expensive DJI Spark bundle to have a controller (we talk about this package more at the end of this section). The controller has advantages in range and in top speed, and it makes controlling the drone easier thanks to tactile joystick feedback.

The range of the DJI Spark is only about 300 feet when using a smartphone and 1.2 miles with the controller. The smartphone type does not affect the range of the drone and users have reported only being able to control the drone to distances of 250 feet instead of the advertised 300 feet. 250 feet is not as impressive as it sounds and this is just another reason to buy the controller. The controller does give the drone the advertised range of 1.24 miles, but the drone cannot achieve this distance due to its battery power. The battery simply will not last long enough to allow the drone to fly 1.24 miles and back (2.48 miles). The maximum range with the battery accounted for is about .85 miles, but this is still much better than the 250 foot smartphone range (about a 4,200 foot difference).
Should you buy the DJI Spark ultimate backpack bundle, you will receive a controller in addition to the other items.
As we previously stated, the Spark footage is stabilized by a 2-axis gimbal. The gimbal performs well, especially in windy conditions. This is slightly surprising given that the drone itself is tiny and seems fragile enough to be killed by a friendly breeze.

The controller is highly recommended as it makes flying the drone much easier thanks to the tactile feedback of the joysticks. Flying with a smartphone is convenient, but the lack of tactile feedback can make it a pain to fly. The controller comes with a mount for a smartphone to get a first person, real time view from the drone’s camera. The drone transmits what it is seeing directly back to your phone in real time so you can control what you record. The connection is lag-free (a major issue with cheaper drones) and will not stutter. Unfortunately, the controller only comes in the $700 DJI Spark package that is $200 more expensive than the basic Spark package, but luckily, you might be able to pick up a used controller on ebay.

We will again reiterate that the controller gives a faster top speed, better controls, and much, much better range, so we do recommend buying the more expensive bundle if you can afford it. The drone is essentially handicapped without the controller and it cannot achieve its full potential without it.

Pros Vs Cons
The Good
The Bad

It’s A Great Toy Check Out Some Of "THE FEATURES" On This Great Machine!

We highly recommend this drone for beginners, drone pilots on a budget, and people looking for a portable drone. The size is unrivaled in the DJI line of drones and the video footage is phenomenal for the price point and size.

The camera’s quality is not great but its stabilization is amazing. This drone has some of the best video stabilization of all the drones at a similar price point and the resulting videos it creates look silky smooth. DJI has done a fantastic job of making sure that the 2-axis gimbal does its job nearly as well as its 3-axis gimbal counterparts.

The drone itself flies much better than it would initially seem to be able to. Although being extremely light and seemingly fragile, the Spark can hold its own in the skies and is able to survive gusts of wind and high speeds without too much camera shake. It has a decent range and battery life and its specs can be improved to rival those of higher end drones with the purchase of a dedicated controller.

The built in gesture reading is somewhat interesting but is, overall, a bit gimmicky and unnecessary. It offers few features beyond selfies and its uses are extremely limited.

This drone won’t burn a massive hole in your pocket, but will introduce you to all the fundamental aspects of flying a drone and familiarize you with drone features. It is also ridiculously small and portable and its little body is packed with features that you will find in more expensive high-end drones.

This is a great little drone and definitely worth the money, and if you have an extra $200 lying around you can buy the more expensively priced bundles which come with accessories like the dedicated controller (which we have praised endlessly in this review) for a better flying experience. The controls are simple and easy to master making this great if you want to get into the awesome hobby of drone piloting.

Want to join the discussion?
Feel free to contribute!

This site uses Akismet to reduce spam. Learn how your comment data is processed.